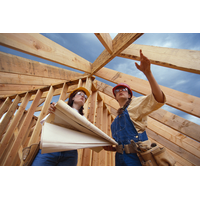 The History of NAWIC

The National Association of Women in Construction (NAWIC) began as Women in Construction of Fort Worth, founded on September 11, 1953 by Doris Efird and 15 other women who were looking for a support system. These women were all actively employed in the construction industry and had been doing business with each other for years when they decided to finally meet face to face. The founding members of Women in Construction of Fort Worth were Alice Ashley, Ida Mae Bagby, Carolyn Balcomb, Sue Bowling, Margaret Bubar, Margaret Cleveland, Era Dunn, Doris Efird, Ronda Farrell, Hazel Floyd, Jimmie Blazier, Nina Ruth Jenkins, Ethel McKinney, Irene Moates, Mildred Tarter and Edna Mae Tucker. This progressive group of women had the foresight to create an atmosphere where they could network and support each other professionally as well as personally. This support system gave them the confidence to reach for and achieve their goals. When describing this group of women, Alice Ashley said, "We were women with electricity in our veins, cement dust on our shoes, sawdust on our minds … busy, busy, busy, filthy things. " In the first year of its existence, Women in Construction raised over $2,700 to donate to the Foundation for Visually Handicapped Children. They wanted to branch out beyond Fort Worth in search of other women to join the organization, but they discovered the charter was not adequate and did not have the powers to organize other chapters. Women in Construction of Fort Worth amended their charter to incorporate other chapters in Texas and throughout the nation. In doing so, on May 17, 1955, they became The National Association of Women in Construction.

Advancements were made over the years with the inception of The NAWIC Image in 1969, the official publication detailing Association news. In honor of the founding members, The NAWIC Founders Scholarship Foundation (NFSF) was created in 1961 to award scholarships to students pursuing construction-related studies. The NAWIC Education Foundation (NEF), founded in 1972, developed programs to enrich the minds of children as well as adults.

Over the years, the cause of NAWIC has stayed the same: To enhance the success of women in the construction industry. NAWIC has many education opportunities: For children - to explore and open their minds to the possibilities construction offers as a career choice; For Adults - to further their careers with certification courses. For more than 30 years, NEF has offered creative and educational programs for students from grade school to high school and adult certification programs. The Foundation's award-winning Block-Kids program, Building Design Program and the CAD/Design/Drafting Scholarship Awards competitions introduce students to careers and opportunities in construction. NEF's adult certification programs include: Certified Construction Associate (CCA), Construction Document Specialist (CDS) and Construction Industry Technician (CIT), which are administered through Clemson University. Since its founding, the NAWIC Founders' Scholarship Foundation (NFSF) and NAWIC chapters nationwide have awarded more than $4 million in scholarships to students pursuing construction-related studies.

NAWIC has developed nationally recognized awards programs to celebrate the achievements of women in the industry, as well as supporters of women in the industry. This year marks the 11th anniversary of the Crystal Vision and Crystal Achievement Awards. The national campaign for Women in Construction Week is held the first full week of March each year and provides opportunities to celebrate women in construction and to educate the public of their cause. The NAWIC Image, the national bi-monthly magazine showcases the efforts, causes and issues of NAWIC members and the construction industry. It has been the voice of today's woman in construction for more than 35 years. NAWIC provides education, networking, legislative awareness, industry and community involvement, personal growth and development and lasting friendships. NAWIC is the voice of women in construction.