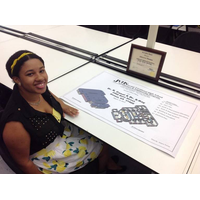 Abiyerra Thomas dreams of becoming an architect and designing a house for her family. Considering the success this rising Jordan Vocational High School senior had in a national architecture competition during her junior year, she probably should include an awards room in that house.

She won the National Association of Women in Construction’s 2016-17 computer-aided design competition. Before capturing the national title, along with $1,500 and the first-place plaque, she finished first in the state and the Southeast region, receiving an additional $100 and other prizes and certificates.

“I didn’t have too much confidence when I first started,” said Abiyerra, 17, an honor-roll student with a 3.8 grade-point average. “Then, when I found out I won all of those first places, it was really unbelievable.”

That’s because, being in a class with three times as many boys than girls, she had to persevere through teasing and trash talking.

“They were always in competition with me,” she said. “They were like, ‘Look at my design. It’s better.’”

But she wasn’t discouraged. In fact, she encouraged herself to work harder and prove the doubters wrong.

“It helped me be a little more creative,” she said.

Abiyerra is the first Jordan student to win the NAWIC national competition and the first winner from Georgia in 55 years, said Jordan architecture and engineering teacher Clayton Graham.

Graham has taught architecture and engineering for 19 years, all at Jordan. He described Abiyerra as possessing a rare combination of artistic and technical ability, blending flair with function.

“She’s humble,” he said. “She works very hard, very diligently. She’s very studious, and she ignores a lot of crap.”

Asked to explain, Graham said boys in the class “tried to get under her skin, but she always kept her cool. … They gradually respected her. She always stood her ground.”

Although 45 percent of architecture school graduates are women, only one-fourth of architects in the profession are women, according to the data Kate Schwennsen, director of the School of Architecture at Clemson University, presented to the 2016 American Institute of Architects convention. That’s a huge increase from the 1 percent of licensed architects being women in 1973, but the recent trend isn’t promising.

“Schwennsen also noted that the percentages of females earning architecture degrees and getting involved in the profession have been relatively stagnant over the last decade, meaning the long-term data gains aren't carrying over to present day,” Steve Cimino wrote in a May 27, 2016, article on the AIA website.

The NAWIC competition is conducted by a women’s organization, but male students also compete, prompting Abiyerra to conclude, “It feels good to know I’m a step ahead of them.”

Abiyerra hopes her success “can give confidence to women who want to follow their true passion instead of doing what the world expects them to do.”

Receiving an internship this summer at Grayhawk Homes also has helped her realize, “If I put my mind to it, I can do this.”

The challenge in the competition was to design a single-story family dental clinic for two dentists. The clinic had to be a minimum of 3,000 square feet with at least 14 parking spaces and fit on a site plan of roughly 1.5 acres. The students could use any materials they chose, but they had to preserve the property’s trees “to the best of their ability,” Graham said.

The students had about four months to complete their project by March 15. Abiyerra finished with two days to spare but added with a smile, “I was making some adjustments to it right up to the deadline.”

The toughest part of the competition, Abiyerra said, was meeting each standard.

“We had to follow a lot of criteria that wasn’t too easy, so you had to mix your ideas with their demands,” she said. “… I was really bad with dimensions. Everything was all different types of sizes, but eventually I got it right.”

Abiyerra is most proud of putting an aquarium in the waiting room as part of her design. She also likes the curved filing area, circular windows and the skylights in the treatment rooms. The purpose of those extra touches, she said, is to combat the notoriously uncomfortable reputation of a visit to the dentist.

“I was thinking mostly about children when I designed this,” she said. “I wanted to give it a calming feeling.”

In addition to her 50-minute architecture class each school day, Abiyerra estimated she devoted another three hours per week to the project. The competition also required the students to submit a written report about their design process.

Abiyerra was one of nine students in her Architecture II class at Jordan and one of 24 students in the school’s architecture program in 2016-17, Graham said. She was among four Jordan students in the competition and 13 total in the state. Her design was selected as the best among eight regional winners and is good enough to be built to professional standards, said Graham, who worked for 18 years in architecture, engineering and landscape architecture before he became a teacher.

The Jordan students competed through the Atlanta NAWIC chapter, the only one in Georgia now. Lynn Logan, the NAWIC competition chairwoman and former Atlanta chapter president, emphasized that the competition’s judges see each entrant’s design with only a number as the identification, so their name, school and demographics aren’t revealed. She said the judges were impressed that Abiyerra “added features to her dental office no one else thought about” and she demonstrated “accuracy, imagination and detail.”

Logan, project accountant for Chasm Architecture in Atlanta, said Abiyerra “would definitely excel if she wanted to go into this.”

Asked why women aren’t proportionally represented in the architecture profession, Logan said, “Maybe they don’t have the proper encouragement from teachers and parents. Construction has such a negative connotation for women. They think of people getting their hands dirty, but you have to begin with the imaginative design to put that building out.”